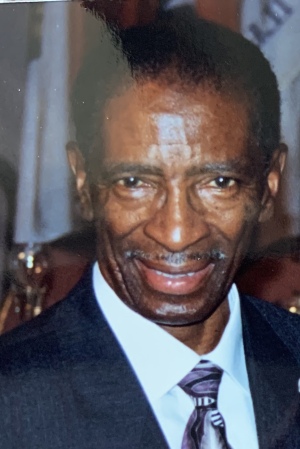 Lawrence Edward Fletcher answered the Lord’s call Friday, June 5, 2020 at his home with his loving wife by his side. He was born in Steubenville, Ohio, December 10, 1927, the son of Maurice and Elvie Fletcher.

He grew up in the city of Steubenville, graduated from Steubenville High School in 1946 and began his service in the United States Navy in June 1946. In April 1948 he was honorably discharged.

He worked at Franklin Machine Works for ten years before beginning his employment as a stationery engineer at Titanium Metals Corporation from which he retired after thirty years.

He professed faith in God at an early age and was baptized at Quinn Memorial African Methodist Episcopal Church where he served as a loyal usher and trustee for many years. He was named President Emeritus of the Quinn Memorial AME Trustee Board.

In 1999 Quinn Memorial AME Church bestowed upon Bro. Fletcher the Men of Distinction Award for his invaluable contributions and services to the people of the community while holding to his ideals of spirituality, humility, and integrity.

August 8, 2002 in Birmingham, Alabama, he was awarded the Distinguished Service Award for Outstanding Dedicated Service by the National Association of Colored Women.

An avid gardener and carpenter, he loved to gather and spend time with his family. He was a Third-Degree Mason and a member of the Eastern Light Lodge #64.

Viewing and Service will be held at Quinn Memorial AME Church, 515 North Street, Steubenville, Ohio, Saturday, June 13, 2020. The church has been professionally prepared by Apollo Cleaning Service for this Homegoing Celebration for their own Lawrence Fletcher. Viewing will be held Saturday morning from 9-11am followed by the funeral at 11am.

Due to this time of COVID pandemic, the funeral at 11am will be limited to 50 people. The church and family are requiring that all entrants wear a facial covering and adhere to social distancing which will be arranged by the Vinson Mortuary. Rev. Buena Smith Dudley, Officiant.

In lieu of flowers please give donations to Quinn Memorial AME Church in the name of Lawrence Fletcher.

To send flowers to the family or plant a tree in memory of Lawerence Edward Fletcher, please visit our floral store.