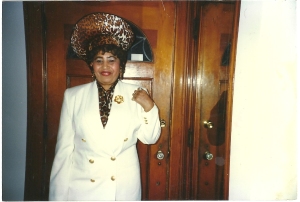 Louise was born in Raleigh, North Carolina on December 25, 1930 to the late, Betsy Ann Shamberger Wooten and William "Bill" Wooten, Sr. of Kinston, North Carolina. She was reared in Robbins, North Carolina by her maternal grand-parents, Rufus Shamberger and Emily Brower Shamberger. In the early morning of April 9, 2020, Louise gained her wings and took flight to her heavenly home to spend eternity in the arms of her Lord and Savior, which was her ultimate goal. She could often be heard singing, "I want to Go to Heaven, When I Die."

Louise was educated in the Moore County School System. She was known to bloom wherever she was planted, and she made long-lasting friendships throughout her lifetime. She loved travelling and did so extensively in her younger years and some travelling during her latter years. Her travels included states within the USA and abroad, often bringing her sister, Pearl, and cousin, Eva along with her. Meeting new people was a joy to her; eventually taking them on as family. Louise resided in Greensboro, North Carolina where she was employed by the Sedgefield Country Club. She later moved to Oakland, California, where she was employed by the Fortune Cookie Factory. The majority of Louise' life was lived in Steubenville, Ohio where she was employed as a Bus Driver for Special Needs children with the Jefferson County Public School System, until her retirement. She had an extreme love for each of the children as though they were her own. Louise was an active member of Second Baptist Church for over 40 years and was a member of the church choir until her health declined. Louise was loved immensely by her family and all those who ever had an opportunity to meet her.

Louise will be remembered for her “sassy yet classy” demeanor, her signature shade of red lipstick, her Sassoon and Gloria Vanderbilt jeans, her hats, her jewelry, her high heel shoes, and lastly, her laughter that could be felt by all who were fortunate enough  to hear and appreciate it.  Louise was the storyteller, historian, and entertainer of the family; that alone creates a huge void within her family unit and will be greatly missed. She was a beautiful person, both inside and out. She enjoyed cooking and hosted gatherings in her home for many years. She was loved dearly by all, many of whom referred to her as either Lucy, Sister, Lou, Aunt Lou, or simply, Auntie. She absolutely loved singing and was a lifetime member of the Shamberger Voices, which originally included her mother, uncles, aunts, sisters, and cousins of her generation. The Shamberger Voices would later include her nieces and nephews as well.

Though Louise never physically birthed children of her own, she claimed each of her nieces, nephews, and stepchildren as her own and loved them in that same capacity, whether near or far. Louise had the type of disposition and large personality that when she stepped into a room, her presence was immediately noticed and felt throughout. Her large, loving, and very open heart prompted her to open her home to individuals in need of lodging, both short and long-term or just to feed them a hot meal. She was well known throughout her community, and became a surrogate mother to many, friends and strangers alike, while living in Steubenville, Ohio. Many of them referred to her as "Aunt Lou”, "Miss Louise or "Mama Louise."

She can now proudly declare "I am free, Praise the Lord, I'm free... no longer bound, no more chains holding me. My soul is resting, it's just a blessing...Praise the Lord, Hallelujah, I'm free!"

Interment will be held at the Ft Steuben Burial Estates, Wintersville, Ohio 43952. The date and time of service will be announced later. Arrangements are entrusted to Vinson Mortuary LLC, 711 North Fifth Street, Steubenville, Ohio 43952.

To send flowers to the family or plant a tree in memory of Margaret Louise (Shamberger) Eyer, please visit our floral store.

You can still show your support by sending flowers directly to the family, or by planting a memorial tree in the memory of Margaret Louise (Shamberger) Eyer
Share a memory
© 2020 Vinson Mortuary LLC. All Rights Reserved. Funeral Home website by CFS & TA